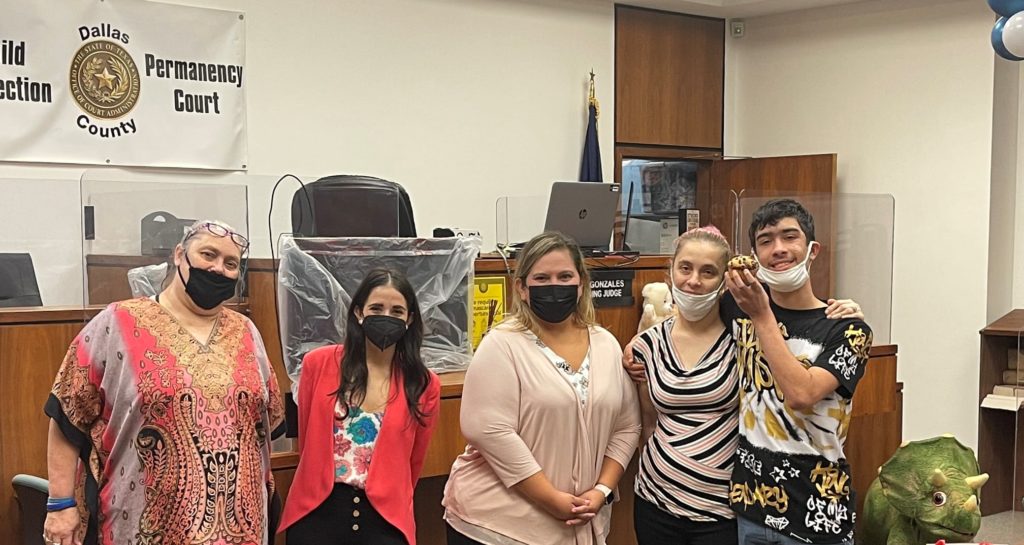 Back in 2009, 4-year-old Mikey* and his two brothers were removed from their home and placed in foster care. They had been living with their mother Cynthia and their maternal grandparents Tanya and Cody, all three of whom were struggling with substance addiction.

Initially, the three boys were all sent to the same foster home, with a family who had hopes of adopting them. That family ended up adopting Mikey’s brothers, but sending Mikey back to foster care because of some issues with his behavior that they weren’t equipped to address.

In 2014, after Mikey had already been in foster care for five years, Dallas CASA Supervisor Megan Farrell was appointed to advocate for him.** He was 9 years old at the time.

“When I met him, he was just a sweet little boy….he really had some stuff going on with boundary issues. We really had to work with him on appropriate touching and that kind of stuff, because he would just go up to somebody and want to hug them,” Farrell said. “I really just enjoyed this time; we connected right away.”

Not long after Farrell was appointed, Mikey was sent to yet another foster home, with yet another family who planned to adopt him. He lived there for about three years. Despite high hopes, unfortunately, it also fell through.

“I think that killed Mikey because, you know, he thought that was going to be his forever home,” Farrell said. “That one hurt.”

Meanwhile, Mikey’s family—his mother Cynthia and his grandparents Tanya and Cody—didn’t know where he was, or even if he was alive. Collaborative Family Engagement (CFE), the family finding and engagement approach between CASA and CPS, had not yet come to the area. CPS had closed the door on the family early on in the case and had not stayed in contact. Because of this, CPS also had no idea that Tanya and Cody had been completely clean since shortly after Mikey and his brothers had been removed from their care—the experience of losing them had been nothing short of a wake-up call.

“I hadn’t seen [Mikey] since he was 4….We knew he was in a residential treatment center and he had been in several different foster homes,” Tanya said. “My husband had been checking on websites to try and find out where he was at.”

More years and foster placements came and went, until CFE made it to Dallas County in 2019. Soon thereafter, Judge Delia Gonzales of the Dallas County Child Protection and Permanency Court designated Mikey’s case to receive CFE. CASA and CPS went back into the case files and, 10 long years later, began to revisit the idea of contacting family.

“About two years ago they sent all of our family a letter trying to find family members of his, and we answered it back, because we’d been looking for him. You know?” Tanya said. “They were telling us that there was a new program [CFE]; that they’re trying to place the kids back with the families.”

Shortly after getting the letter, Tanya and Cody met with Mikey’s attorney/guardian ad litem, Gaby Sotelo, who told them that he was currently in a residential treatment center and had been in several different placements over the years. They started with phone calls, talking with him once a week for 30 minutes. Then, after the next court date, they graduated to Zoom video chat.

Mikey’s grandparents hadn’t seen him since he was 4. The next time they saw him, he was 15.

Starting in January 2021, Tanya and Cody got to take Mikey for a weekend once a month, and for a full week during Spring Break. On May 28 of this year, he got what he had been dreaming of: to go home and live full-time with people who love him.

“Every time we look at him, we still see the little boy….And sometimes he acts like that little boy!” Tanya said.

These days, Mikey’s mother Cynthia also gets to visit, supervised by his grandparents. The first time she came to see him, after what had been more than 10 years, Tanya and Cody organized it as a surprise.

“The first time he saw his mom, it was awesome. That’s all he wanted, was his mom,” Tanya said. “Now she comes over quite a bit and sees him.” On Aug. 27, 2021, after Mikey had spent 4,298 days in foster care, the judge officially ordered for permanent custody to be transferred to his grandparents, who are, proudly, 13 years clean. During the final hearing, Mikey asked if the team on his case could all get together one last time, at the courthouse.

The date he chose? His 16th birthday. In preparation, Judge Gonzales called asking about his favorite breakfast food. He responded without hesitation, “Pop Tarts.” When the family arrived, she had decorated with balloons and brought muffins, cupcakes, and—you guessed it—Pop Tarts.

At the time of our interview with Tanya, Mikey’s older brother was staying at their house for a visit. They make it a priority to see each other a couple of times each month to continue building the family bonds.

Farrell, Mikey’s CASA advocate, jokingly described him as “spoiled rotten”—he has his own room, his “foster kid” label has been removed, his medications have been reduced, he’s making friends at school and he has a true community with a family who loves him unconditionally, for the first time in 12 long years.

“Just a night and day difference,” Farrell said. “He’s so happy just to have his people….and I couldn’t be happier for him.”

**In the majority of instances, children in foster care are served by unpaid CASA volunteer advocates. In some specific cases, a CASA staff member is appointed instead, who follows the same standards of advocacy.